I Wish I Could Dodge the Evolution-Creation Controversy

Soon, or perhaps already, a mutant army of mosquitoes and caterpillars are being unleashed in the Brazilian jungle.

The idea is for these mutants to outcompete their non-mutant comrades and thus to put an end to the grandfather clause for mosquitoes! (Warning! There are several more bad puns in this otherwise very serious post.)

Let’s see dengue-carrying mosquitoes mutate their way out of that one! 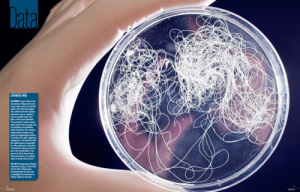 The picture above is spider silk.

It’s not stronger than steel, like an actual spider’s silk is. The E. coli must be lacking some cellular equipment that the spiders have. Further, their production of the silk is so slow—a few hundredths of an ounce in three hours—that the silk currently serves no commercial purpose.

Nonetheless, the common threads (pun not intended, but not removed, either) in these two stories is the transfer of genes between species and evolution.

We’re doing it in a lab.

Can We Really Reproduce Evolution in a Laboratory?

If you have even a small interest in science, you ought to subscribe to Discover.

If you want to get involved in the creation-evolution controversy and have any idea what you’re talking about, you really must subscribe to Discover or something like it. (That is, unless you’re a scientist reading the actual peer-reviewed articles.) Once you’ve started with sources like Discover and New Scientist (though Discover is much more interesting) I can show you how to follow up on and verify their articles with authoritative articles and studies.

So can we really re-create evolution in a laboratory?

Yes. The only reason we haven’t raised a Neanderthal in a lab is because:

We already produce insulin for diabetics using yeast that’s been given the human gene for insulin production!

Do you understand that yeast is a fungi? It belongs to a different kingdom taxonomically. It is as unrelated to humans as any plant or bacteria. Yet we can install our genes in yeast and get the yeast to run those genes.

Our ability to convince E. coli to make spider silk and yeast to make human insulin ought to be a slam dunk for evolution. The argument ought to be over!

I’m telling you, folks; we (we being deeply-committed followers of Jesus Christ) are going to look as foolish today as we did back when we said the earth couldn’t possibly go around the sun.

Actually, we already do. What I mean is that it’s not going to be too awful long before the truth slaps us in the face so hard that we won’t be able to deny it anymore.

The other day I ran across a web site on creationism. In other words, it’s against evolution, even though I can’t figure out why a person who believes in creation can’t make room for God to have created by evolution. On that site, I found:

How did a fish get lungs by accident? How did the precise, exact information to build a lung get written into a fish’s DNA code by natural selection? … Lungs are designed for breathing air. Why would a random accident even start building a lung in the first place? How could a mistake – a random accident in a DNA code – just happen to be exactly the right step leading to a DNA code for a lung?

Even I have to admit it’s a good question. It’s the sort of question that ought to be asked if we have any interest in knowing if evolution is true. (And if we’re going to say evolution is not true or, even more pertinently, if we’re going to accuse scientists of a conspiracy to deceive us, then we better have a good inkling whether evolution is true, or we’re really terrible people who will assuredly be judged by God for our slander against people who have been much more honest and diligent than ourselves.)

The web site doesn’t answer it. It just leaves the question of how a fish’s lung could evolve hanging out there, suggesting to all of us that the question in unanswerable.

It’s not only answerable, but I know the answer.

We’re Christians, though. We don’t care, so I’m not going to bother with it. Let’s just continue on our awful path, loving our ignorance.

I guess I was in a bit of a mood today. Maybe it’s the chemo. I’m low on blood, the chemotherapy is still working, and as a result my head is swimming and I need more oxygen …

I am married, the father of six, and currently the grandfather of two. I run a business, live in a Christian community, teach, and I am learning to disciple others better than I have ever been able to before. I believe God has gifted me to restore proper foundations to the Christian faith. In order to ensure that I do not become a heretic, I read the early church fathers from the second and third centuries. They were around when all the churches founded by the apostles were in unity. I also try to stay honest and open. I argue and discuss these foundational doctrines with others to make sure my teaching really lines up with Scripture. I am encouraged by the fact that the several missionaries and pastors that I know well and admire as holy men love the things I teach. I hope you will be encouraged too. I am indeed tearing up old foundations created by tradition in order to re-establish the foundations found in Scripture and lived on by the churches during their 300 years of unity.
View all posts by Paul Pavao →
This entry was posted in Evolution and Creation and tagged creationism, Evolution, fish evolution, honesty, ignorance, lung evolution, slander. Bookmark the permalink.